Journey from Delhi to Mumbai For Fast Track Recovery and A Pain Free Life….

Mr Doshi goes on to add that not only did he have a speedy recovery but also the Honest opinion of Dr Santosh Shetty gave him relief with only a Injection and he Didn’t need to Undergo a Knee Replacement Surgery for Lt Knee.

Mr Himatlal Doshi who was around 116 kgs also thought that due to his weight his recovery would be slow.
One day he read about an ongoing Health camp and Arthritis awareness program arranged by Dr Santosh Shetty and decided to meet him and take his opinion.
After meeting Dr Santosh Shetty and seeing and interacting with his operated patients he decided to drop the idea of going to Gujarat for the Surgery and get it done in Mumbai.
Dr Santosh Shetty a Leading Joint Replacement Surgeon from Suburban Mumbai assured Mr Doshi that with the New techniques his recovery will be much faster and that he Requires only Knee Replacement for one Knee and the other can be managed with a Joint Preservation Technique like Regenerative Cell Therapy.
Mr Himatlal was very happy to hear that he will need surgery on only one Knee and the other will be taken care by an Injection.

Dr Santosh Shetty who is a pioneer in FastTrack Surgery and 123 Recovery protocol operated Mr Doshi on Rt Knee Joint and gave an Intraarticular Injection into the Lt Knee Joint.
Mr Doshi walked after 4 Hours of Surgery and was absolutely comfortable and painless.
His friends didn’t believe that he walked after 4 hrs. So happy was Mr Doshi that he called all his relatives and his friends that his recovery is nothing short of a Miracle. Mr Doshi was operated with Muscle Sparing Technique and 123 recovery protocol where in he was made to walk on the same day and staircase climbing on the second day and discharged on the Third day.
Mr Himatlal Doshi who is now socially very active took out more then 70 people on a Pilgrimage after a month to Palitana along with his Family and friends.
Mr Doshi says that Dr Santosh Shetty has Added Miles To My Life.

Please Call us at: 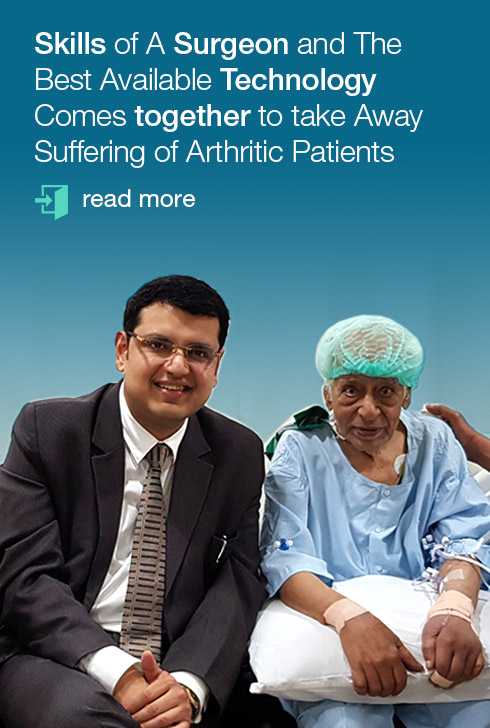